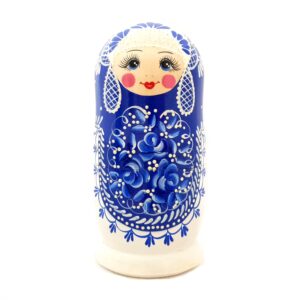 Russian wooden dolls, also known as stacking dolls, nesting dolls, and matryoshka, are a set of wooden dolls that is a symbol of Russian tradition. The diminishing sizes of these best wooden dolls mirror the classic arrangement. They are popular throughout the world. These wooden dolls are placed one inside another.

The originality and simplicity of nesting dolls are commendable. These dolls are long-lasting and eco-friendly as they are crafted with natural materials. Russian dolls are handcrafted and hand-painted. They are one of the most recognized traditional symbols of Russia. These dolls wear the traditional sarafan costume of Russia. The best wooden nesting dolls are round in shape and painted in such a manner that they represent a pretty young woman. The heads of these dolls are covered to offer protection from cold weather.

The designing of such dolls is done on different themes such as political leaders, pop icons, animals, and fairy tales, really almost anything you imagine. These dolls are crafted with complete perfection. They are a great example of fine arts.

Russian nesting dolls have been a Russian tradition for centuries. A set of nesting dolls starts with the largest doll, which is called the “mother doll.” The mother doll fits into another smaller doll, and that smaller doll fits into yet another even smaller one. Artists usually carve the dolls to match Russian clothes, customs, and folklore. Your kids will play and learn with these interactive wooden dolls.

Russian wooden dolls can be an excellent gift for your kids, birthday parties, house decorations, new year gifts, etc. They are easy to assemble and store because of their small size. The smallest doll is designed with complete perfection so that users can get the best traditional touch with wooden nesting dolls. The Russian nesting dolls are painted with vivid colors that make the surrounding area awesome.

Wooden nesting dolls are a traditional Russian toy. The set of wooden dolls is carefully carved and painted to represent a sequence of gradually diminishing size dolls. The smallest, innermost doll is often installed with a secret compartment that can be used to hide the bigger dolls from view.

It is believed that when a person purchases a doll, they are purchasing the love and happiness inside of it. With The Russian Treasure, you will experience the best quality wooden nesting dolls. We have a collection of dolls that Russian artists craft. You will get an easy booking and shipping process with us.

If you’re looking for a unique gift for someone, wooden nesting dolls might be just what you need. These dolls have a long tradition in Russia and Eastern Europe.

The history of Russian nesting dolls is quite interesting. The first set of these dolls was created by Vasilii Zvyozdochkin and Sergei Malyutin. Vasilii was looking to create something new. He planned to create a wooden doll that could conceal other toys inside it. Thus they bring out a wooden doll that was dressed in traditional attire. With a headscarf, these dolls appeared amazing. The name was given as “matryoshka,” which implies “little matron,” commonly known as Rooster Girl. However, at that time, people most commonly called it as the doll, which carried a rooster in their arms.

The nesting dolls are traditional dolls of Russia and depict the different phases of women that they perform throughout their entire life. Inside the bigger dolls, there are a number of dolls. Mostly there are five to seven dolls, and each one of them reflects different characteristics. The first time this doll was presented at Exposition Universelle in Paris, France. And most surprisingly, it received the bronze medal. From here, the dolls gained much popularity, and their production started at many locations in Russia. Also, they didn’t remain popular in the nation, but they enjoyed a lot of popularity worldwide.

Even if you do not belong to Russia, you can experience the best of Russian culture with our wide collection of Russian dolls. Nesting dolls have been popular all across for several years. The smaller object gets fitted inside, the larger ones, and after that, they all can be nested in the larger object. Nesting dolls are a Russian tradition, and they come in all shapes, sizes, and designs. It is important to know what you’re buying before making the purchase.

Nesting dolls are a type of Russian doll that can be nested into one another. Nesting dolls have become popular because their seemingly endless number of pieces can be arranged in many different configurations.

Nesting dolls are a great present for kids and an educational toy for them to play with. They’re not just for children, though; grown-ups can enjoy nesting dolls too! There are many different kinds of nesting dolls to choose from, but it’s important to know which style is best if you want to buy one.

There are many nesting dolls of famous people, animals, and national landmarks. Nesting dolls also come in various materials such as wood, porcelain, papier-mache, and felt.

If you are buying a nesting doll as a gift, make sure to put it in its original packaging. There are traditional ones too that have just one image that goes from the outside to the inside of the doll. In addition, there are mixed dolls that can change depending on how you turn them, and there are even animated dolls where little wooden people come out of the doll.

These dolls are usually painted in bright colors, often depicting Russian folk art or fairy tales characters. Wherever they are displayed, they are sure to attract attention and come across as attractive and charismatic design ideas.

Currently, you will find a number of imitators who are good at mass production; thus, you should ensure the quality of wood and paint material before buying them. Besides this, you should also check that joints don’t loosen with time because of improper finishing.

Whatever be the occasion, the traditional doll of Russia acts as the best gift alternative. Nesting dolls are a great gift for any occasion. They’re inexpensive, durable, and come in all sorts of designs. These dolls can be given to little ones as an educational toy that teaches them about the different countries around the world. Since they come in so many sizes, they can also grow with the child as they learn more about their native culture.

Here are some examples of events where you can use Russian dolls in the form of gifts.

Stacking dolls are the best example of amazing folk artwork. You will see the metaphorical representation with the wonderful themes of Russian dolls. Artists use their best skills and efforts to craft eye-catching dolls. The crafting method of Russian dolls has not changed yet. It is manufactured with the same process. The nesting dolls are hand-painted with bright colors to suit the taste of buyers. With their increasing popularity, they are available in multiple shapes and sizes.

The theme of these stacking dolls was at some time based on certain subject matters such as fairy tales, household pets, folktales, and many more. The traditional stacking dolls resemble a woman perfectly dressed in sarafans, scarves, or fur coats. The doll of each set appears identical to the other. Common colors painters selected for their costumes are red, yellow, and blue. Also, sometimes the paint color of every doll remains the same, and each one of them carries something different in their hand.

Qsn. What Is Wooden Matryoshka?

Ans. A Matryoshka doll is a typically Russian set of wooden dolls, originally made by nesting smaller dolls one inside another. They are hand-painted with a single figure on the outside and a smaller, nested figure inside.

Qsn. What Is A Doll Within A Doll Called?

Ans. The simple and popular word for dolls within dolls is Nesting doll. However, several terms are used to describe these dolls, such as Russian nesting dolls, stacking dolls, matryoshka, and babushka dolls. They come in a set of diminishing sizes that get placed one inside another.

Qsn. Where Did Russian Wooden Dolls Come From?

Ans. The beginning of Russian dolls is said to be in Asia, and artists of Japan and China started creating the best wooden dolls in the 1700s. After that, one Japanese artist bought a nesting doll in an exhibition in Russia. With the eye-catching creativity, Russia’s artist gets impressed and starts making their Russian nesting dolls.

Ans. The process of creating Russian nesting dolls is still the same. They are created with the hand and give them a curve with a turning machine (lathe). After that, it is painted by hand. There is no fixed measurement and template for crafting the dolls. Crafter decides on his own and presents the best creations.

Qsn. What Are Russian Dolls Made Of?

Ans. The Russian nesting dolls are hollow wooden dolls that are mostly crafted with linden trees. After giving it a proper shape, it is painted with vivid colors that enhance its beauty. The larger hollow dolls contain other small figures inside. Because of this reason, they are also called stacking dolls.

Qsn.How Much Does A Russian Doll Cost?

Ans. The traditional dolls of Russia are always handcrafted and hand-painted, and thus they are priced accordingly. A variety of Russian dolls are available in the market, and each one of them comes with unique features and patterns. It implies that the cost of every doll would be different. However, the price starts from $41 and goes up to $200, depending upon the uniqueness and pattern.

Qsn. What Are Russian Dolls Called?

Ans. Russian nesting dolls are popular dolls in Russian culture. Someone who does not belong to Russia or is not familiar with Russian traditions can relate stacking dolls with the peasant life of Russia. They are beautifully placed, one inside the other.

Qsn. What Is The Purpose Of Nesting Dolls?

Qsn. For What Age are Russian Nesting Dolls Suitable?

Ans. Russian nesting dolls are meant to be enjoyed by children. However, they can also be enjoyed by adults who want to keep memories of childhood memories alive. They make such great gifts for a child with their family members and friends of all ages. However, if you are offering Russian dolls to your younger ones, then be careful that they don’t put them inside their mouths.