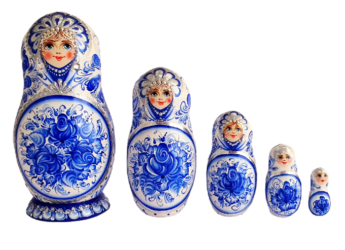 Matryoshka is a Russian wooden toy – a hand-painted doll, the type and nature of the painting is dictated by the types of nesting dolls. There are five varieties in total, these are Tver, Semenov, Vyatka, as well as Polkhov-Maidan and Zagorsk, which are also called Sergiev Posad nesting dolls. The dolls are made in the shape of an egg, they hide similar dolls in themselves, but smaller. Inside the matryoshka you can find from three of its mini-copies.

Tver variety of matryoshka. This is the most fabulous and interesting matryoshka, since the dolls themselves are made in the form of heroes of Russian folk tales, such as Vasilisa the Wise and the Beautiful, Princess Nesmeyana and others. Each subsequent doll is different from the previous one, so it will be interesting for any child and adult to look inside the nesting dolls. There are nesting dolls of large sizes, and there are also tiny ones, it all depends on the level of skill of the manufacturer.

Semyonovskaya variety of matryoshka. You can get such a nesting doll by buying it in any souvenir shop, since this type of doll has been produced on a large scale for a long time, this is not an exclusive doll. But such a matryoshka is a real village woman, with a painted scarf and a flower dress. They paint the Semenov matryoshka without adhering to certain canons. These types of nesting dolls are suitable for creativity, especially for children, since they do not require the implementation of clear painting rules.

Vyatka variety of matryoshka. A feature of this kind of doll is its decoration, and these are not only complex and neat drawings, but also the use of such material as rye straw, which is glued on top of the paint, creating a unique costume. Such types of nesting dolls began to be produced only in the 60s. Only a real craftsman can paint and “dress” a doll on his own.

Polkhov-Maidanskaya variety of matryoshka. This type of doll is very interesting, the masters are favorably distinguished from all the others by the variety of toy painting. There are several varieties of coloring, these are flowers with and without a tip, sheathing, as well as drawings made under oil. These types of nesting dolls are made exclusively in the city of Polkhovo-Maidansk, which attracts tourists here – collectors of Russian folk art. Another feature of this kind of doll is its shape. From its sisters, the Polkhov-Maidan matryoshka differs in size and various shapes, both round and oblong, elongated and flattened.

Sergiev Posad varieties of nesting dolls. Such types of nesting dolls are also called Zagorsk. The uniqueness of this doll lies in the fact that it is painted in an interesting manner, simple, but at the same time exquisite. The doll is wearing a scarf, from under which you can see a protruding strand of hair. It is painted with gouache, there is a beautiful sundress and a shirt, rather laconic, without large-scale flowers, but with a simple snake. On this kind of dolls, usually, they also draw an apron. Zagorsk matryoshka is a simple Russian girl, without too much gloss.

After painting with paints, nesting dolls stand until completely dry, after which they are opened with a layer of varnish. This souvenir can stand for a long time, as it is protected by an additional coating. It is this nesting doll that personifies Russian women, beautiful by nature, without additional elements.