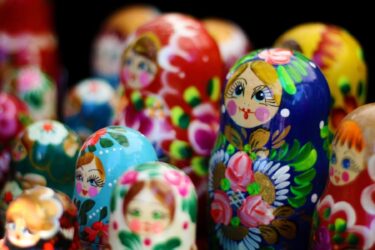 The matryoshka is called “The Young Lady with a Surprise.” This doll is the most popular of all Russian souvenirs. Traditionally, this is a doll in the form of a young Russian woman in a national costume and with a scarf on her head. In the classic version, all dolls look the same, the number of dolls in a set is from 3 to 72. Here are ten facts about matryoshka.

1. The prototype of the matryoshka is a wooden detachable doll of the Japanese god Fukuruma. The toy fell into the family of the famous philanthropist Mamontov from the island of Honshu. But the Japanese attribute the authorship to an unknown missionary monk from Russia.

2. The first sketch of a Russian peasant woman was made at the end of the nineteenth century by one of the founders of “Russian Style” Sergei Malyutin. The famous toy master from Sergiev Posad Vasily Zvezdochkin carved a doll out of wood. They called the novelty by the name Matryona, which was widespread at that time.

3. To make a real nesting doll, you need to know more than one secret. For strength, the tree must necessarily lie in the open air for two years. The creation process from the bar to the finished figurine consists of fifteen stages. The smallest figure is turned first.

4. Matryoshka is a real gold medalist. At the International Exhibition of Handicrafts in Paris, which took place in 1901, the matryoshka took the first prize, traveled all over the exhibition Europe and visited Berlin, Prague, London, Rome and many other cities. Today, anyone can see the unique exhibition “A Difficult Toy” at the All-Russian Museum of Decorative, Applied and Folk Art in St. Petersburg.

5. The popularity of the matryoshka has inspired many famous European masters. In 1892, the Russian consul reported from Germany to St. Petersburg that Russian souvenirs were being forged in Nuremberg and Paris.

6. Matryoshka dolls were not always made in the form of a Russian peasant woman. For example, in 1912, to the centenary of the Battle of Borodino, matryoshka dolls “Kutuzov” and “Napoleon” were made. For the 100th anniversary of Gogol, a whole series of toys with characters from “The Inspector General” and “Taras Bulba” were produced.

7. The world’s largest nesting doll can be seen at the “crossroads of worlds” – in the Chinese city of Manchuria, which is located on the border of China, Mongolia and Russia. The symbol of friendship between the three peoples is complemented by images of Chinese, Mongolian and Russian girls.

8. The largest family of nesting dolls was made in the city of Semyonov. One meter long wooden doll contains 72 figures. In the same city, the Russian Ethnographic Museum is located, where master classes on painting nesting dolls are regularly held.

9. The smallest Matryoshka the size of a poppy seed is located in Tomsk, in the Museum of Slavic Mythology. The figure can only be seen with a magnifying glass. Master Anatoly Konenko not only cut out a figurine a little more than a millimeter in size, but also painted it according to all the rules.

10. There are six museums in Russia dedicated to matryoshka dolls. The Moscow Museum is located in the mansion of Leontievsky Lane, where the first matryoshka was born.