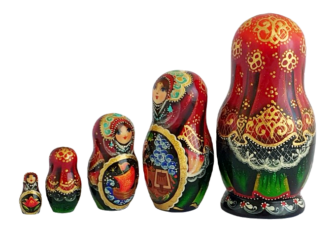 The appearance of the first Russian nesting doll dates back to 1898-1900. It was at this time that the famous turner, Vasily Petrovich Zvezdochkin, who was engaged in the manufacture of wooden toys, at the request of Sergei Malyutin, made a blank from wood, into which the same drop-down blanks were inserted, but of different sizes. The plot for painting the very first toy was the daily activities that Russian beauties were engaged in. The nesting doll consisted of eight wooden dolls.

Later, various variations of nesting dolls appeared, the number of dolls in which was different. So, at the beginning of the 20th century, products consisted of 24 elements, and the famous turner Nikita Bulychev created a doll consisting of 48 wooden young ladies. On a mass scale, nesting dolls began to be produced in the artel of Mamontov in Sergiev Posad.

A few years after its manufacture, the Russian matryoshka was presented at an exhibition in Paris. Foreigners liked the toy so much that Russian craftsmen received orders for it not only from the expanses of the Motherland, but also from other states. Not even ten years have passed since the first precedents for the manufacture of fake nesting dolls appeared in other countries.

Russian nesting dolls differed not only in the number of dolls that were invested in one product. The depicted subjects and painting techniques were different. The most common were dolls consisting of 3, 8 and 12 elements. Masters also produced nesting dolls of 21, 24, 30 and 42 dolls.

Traditional plots for the image on nesting dolls were everyday topics. Most often, the occupations of Russian young ladies of one period or another were reflected. The girls were depicted in traditional dresses with scarves on their heads. In their hands they could hold sickles for harvesting, jugs of milk, baskets with berries, etc. A little later, other subjects began to be depicted on nesting dolls, for example, characters from fairy tales and fables, heroes of stories by famous writers. Also, instead of young ladies, commanders, politicians and other prominent figures could be depicted.

At some point in time, even the shape of nesting dolls was changed, for example, cone-shaped dolls appeared that were inserted one into the other. Such forms did not gain popularity among the common people, and quickly sunk into oblivion.

Traditional nesting dolls also differed from each other in the style of painting. To date, there are:

Deciduous trees are the traditional material for making nesting dolls, since they are the easiest to process. Most often, masters use linden, as paints for painting they take colored gouache, ink, as well as aniline paints. Protects the finished product with wood wax or an oil-based clear varnish.