PUPPET WITH A SURPRISE: WHAT TO TELL CHILDREN ABOUT MATRYOSHKA? 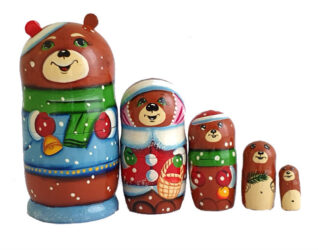 The Russian brightly-painted nesting dolls are a fine work of art and antiquity. Though Matryoshka is native to Russia, they are popular worldwide for their uniqueness, intricate finishing, and lively colours. These dolls have been associated with popular cultures, folktales, and legends. Several poems, stories, and riddles have been composed and written about these dolls for children. Thus, it will be interesting for children to listen to the tale of these special dolls. Acquainting these young minds with the story of the peculiar dolls would be exciting and fun.

HISTORY OF THE DOLL

Matryoshka is not a simple doll. It is a highly decorative and colourful wooden doll having a surprising secret. These dolls are nested and come with pieces that range from five to eight pieces. These dolls are brightly painted and intricately carved to form one of the rich traditions and cultures of Russia. These dolls open at the waist-half and have similar pieces of dolls of smaller sizes inside them. The smallest doll is mostly represented as a baby.

The first such doll was made in 1890 for an international exhibition, where it was well-received. The outer covering depicted a peasant girl wearing the traditional Russian Sarafan and holding a black rooster. The doll had 8 sets and was meticulously enclosed within the other in decreasing size.

In 1970, the biggest Russian Matryoshka doll set was exhibited in Japan. The renowned doll artists and masters from the Russian city of Semenov presented a matryoshka having 72 pieces. Such dolls are difficult to produce on a large scale as it takes extraordinary skills and mastery to make them. Most of these dolls are hand-made by highly skilled artists and painters alike.

WHAT DOES IT SYMBOLISE?

Deep meaning is hidden in the toy doll matryoshka. Consisting of several dolls symbolises motherhood, family, and family ties. From one wooden Matryoshka, emerges the other similar wooden dolls of comparatively smaller sizes. In real life too, mothers have children, and when these children grow up, new family members emerge. Thus, primarily these dolls symbolise motherhood and fertility.

The varying sets of these dolls are open to interpretations according to one’s imagination and understanding of men and matters.

WHY IS IT CALLED MATRYOSHKA?

The name for the doll was chosen for a reason. When the toy had just been invented, in the Russian provinces, many girls were given the name Matryona. Matryoshka is a diminutive form of the name Matryona. This name was loved in Russia. Matryona comes from the Latin word “mater”, which means “mother”. Real peasant women are associated with it, full of health, with numerous children and magnificent figures.

But most of the Matryoshka is depicted wearing the traditional Russian Sarafan in bright colours that originally grandmothers used to wear. Thus, these dolls are also popularly called ‘Babushkas ‘, which mean old women. Another possible reason for the word becoming popular is because it is tough to pronounce Matryoshka. The non- Russians found Babushka easy to use and pronounce.

Matryoshka dolls can fascinate children of different age groups alike. Children and even adults cannot help but admire these artistic works. Children between the age of 1.5-2 years start playing with these dolls. These dolls facilitate the development of fine motor and sensory skills in these toddlers. Children touch these dolls and explore set by set. Opening every set fills them with more curiosity to open the next one.

DEVELOPMENT OF A CHILD WITH MATRYOSHKA

In comparison to modern toys, Matryoshka has a special place and value in facilitating development among children. The bright colours will easily attract a child’s attention, and the various sets would tickle a child’s curiosity. He will find it very interesting to explore a Russian nesting doll. There will always be eagerness for what is coming next.

Matryoshka teaches children to compare figures by height, size, pattern, and volume. Playing with these dolls develops fine motor skills and improves hand-eye coordination. It also helps to sharpen memory and thinking processes. Also, one becomes more logical while playing with these dolls.

Children like to observe patterns, notice the similarities and differences between various nesting dolls, and love to disassemble and rea dolls with their own hands. By studying the toy’s features, an understanding of the traditions and cultures of the Russian people gradually comes.