Matryoshka is not a form, but a meaning. History, tradition and modernity 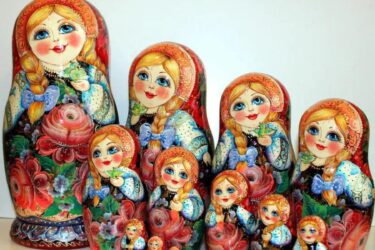 Matryoshka is an unusual wooden toy, loved by many, which not only personifies the traditions of the Russian people but also carries some spiritual symbolism. What is the secret of her popularity, which continues to this day? How did the idea of ​​creating such a toy come about? What painting traditions existed? And why are some modern toys of the same shape and structure just pseudo-dolls, losing the main thing? Interesting facts about the most coveted souvenir from Russia in our article.

The origin of nesting dolls

The exact origin of the Russian nesting dolls is still unknown. But according to the most common version, its prototype is Japanese folding wooden dolls with the image of the pagan god Fukurumi. It is believed that in 1890 one of these was brought to the estate of A. Mamontov near Moscow, who owned the children’s toys workshop “Children’s Education”. Inspired by the idea of ​​a Japanese doll, he immediately commissioned his craftsmen to make a similar one, only in the “Russian style”. Although it is also known that folding eggs existed in Russia before.

So, in 1890 the first Russian nesting doll was carved by V. Zvezdochkin and then painted by S. Malyutin. It consisted of 8 dolls: the largest was a girl in a folk costume, a scarf and with a black rooster in her hand, a boy could fit in her, a girl in it again, and so it alternated until the smallest – a baby in a diaper. At the same time, all the figures differed from each other both in size and in painting.

The matryoshka got its name from the name Matryona, which was popular at that time since it was a simple pious Russian girl who was most often depicted on the toy. And the matryoshka became the personification of the mother of a large family, who had good health, which is indicated by a blush, and curvaceous forms.

Matryoshka also expresses a certain spiritual truth about humanity and God: all in One, and One in all. Each matryoshka from the set seems to be complete, but in isolation from the others, it loses its meaning.

The nesting dolls gained worldwide fame after the exhibition in Paris in 1900. And already 10 years later, the toy began to be ordered from 14 countries of the world. True, due to the outbreak of the crisis in 1900, their production was transferred to the workshop of Sergiev Posad. With the growing popularity of such dolls, more and more workshops for their manufacture appeared and, consequently, new styles of painting.

One of the most popular today “Sergievskaya” paintings preserves the style of the artist Malyutin. Its characteristic feature is that it focuses on the elements of clothing and everyday life, and facial features are small and not detailed.

“Semyonovskaya” painting is distinguished by large eyes of simple drawing, pure colors and details clearly outlined with a black outline.

A feature of the traditional “Vyatka” nesting dolls is the use of inlay technique – decorating with a pattern made of pieces of straw. Yellow and red shades prevail.

The “Tverskaya” is characterized by a special liveliness of the eyes, which are drawn as realistically as possible. In general, the entire matryoshka is painted in complex colors, with great attention to detail.

And finally, the “Krutezkaya” nesting doll can be recognized by the “Chinese painting” technique, when several shades are applied at once with one stroke of a wide flat brush, creating a volumetric detail.