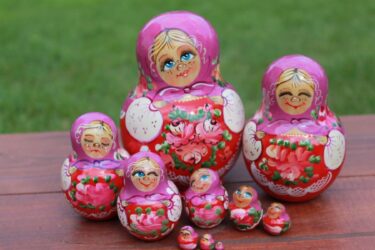 Matryoshka is a painted wooden detachable doll with smaller dolls inside.

What was the very first nesting doll?

History Of The Creation Of Matryoshka

Matryoshka is a painted wooden detachable doll with smaller dolls inside. This toy is rightfully considered the most famous and popular Russian souvenir. The history of the creation of the matryoshka is very interesting and still raises questions. There is a version according to which a Russian master created a figurine of a matryoshka after seeing a similar figurine brought from Japan. The Japanese doll, in which several more dolls were put in, symbolized the local gods of happiness.

Detachable pupae also existed in other cultures, for example, in India and China. The true origin of the matryoshka is still a mystery. However, most likely, the Russian master created the famous toy, inspired by Slavic images. Vasily Zvezdochkin, a craftsman from Podolsk near Moscow, invented the matryoshka shape in the 1890s, claiming that he had never seen Japanese wooden toys before. The origin of the famous toy requires further study.

What Was The First Matryoshka Doll?

What was the very first nesting doll? The author of the sketch for the toy that Vasily Zvezdochkin created is called Sergei Malyutin, despite the fact that Vasily Zvezdochkin never mentioned Malyutin in his memoirs. Sergey Malyutin worked in the Children’s Education cooperative. It was the artel of the famous philanthropist Savva Mamontov. The first nesting doll depicted a girl with a black rooster in her hands; inside it were other dolls, the smallest of which turned out to be a baby in diapers.

The name of the new toy undoubtedly came from the very popular name Matryon at that time. In 1900, the matryoshka was sent to the World Exhibition in Paris, where she received a bronze award. After that, this toy began to be made not only in “Children’s Education”. Craftsmen from Sergiev Posad took up the manufacture of the nesting dolls; they also improved the technology for making nesting dolls. Most often, toys were made of linden, because it is a softwood material that does not crack when dried. Alder or birch wood was used less often.

Matryoshka In The Modern World

At the beginning of the 20th century, Russian wooden toys gained immense popularity, having visited several more foreign exhibitions of that time. Matryoshka is still the first and most coveted souvenir for all foreigners visiting our country. Nowadays, you can see nesting dolls of all kinds, types, sizes and shapes. The imagination of the masters is truly limitless. Now, these are not only traditional girls in headscarves.

Modern craftsmen can deviate from the classic form of matryoshka dolls. Several centers for the production of nesting dolls have gradually appeared in Russia. Widely known:

Each of them has its own pronounced distinctive features.

Matryoshka dolls differ in technique, painting style and material of manufacture. In many cities of Russia there are museums of Russian nesting dolls, in which visitors can see wonderful handmade samples with author’s painting.

There are such museums

Making a nesting doll is not easy at all. Manufacturing takes place in several stages. The matryoshka goes a long way from a block of wood to a finished product. To gain strength, the wood must be cured in the open air for two years! The matryoshka is not just a souvenir, it is not for nothing that the toy appeared in the artel with the name “Child Education”. This is a perfect example of an educational toy for children.

The doll, created a little over a century ago, still inspires craftsmen and admires people all over the world with its beauty.