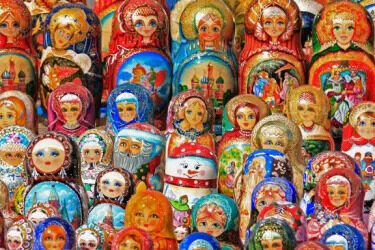 Matryoshka is considered an original Russian souvenir, which foreigners try to bring from Russia. Children enjoy playing with matryoshka, nesting dolls serve as decoration for interiors. But it turns out that the Russian matryoshka does not have Russian roots at all. There is still no reliable information about where the matryoshka came from, there are a lot of myths and legends about its origin. But most researchers are inclined to this: the prototype of the Russian nesting doll was the figure of the Japanese god, which, like the nesting doll, moved apart, representing a receptacle for a smaller figure. The Japanese sample, made with great humor, was a lot of figurines of the Japanese sage Fukurum inserted into each other – a bald old man with his head stretched up from numerous thoughts.

The author of the matryoshka was the turner Mikhail Zvezdochkin, and the artist Sergey Malyutin painted the first matryoshka in the form of a peasant girl, who was soon baptized by the people with the common name Matryoshka (Matrona).

Why was the doll called “Matryoshka”?

Almost unanimously, all researchers refer to the fact that this name comes from the female name Matryona, common in Russia: “The name Matryona comes from the Latin Matrona, which means “noble woman”, Matrona was written in the church, among the diminutive names: Motya, Motya, Matryosha, Matyusha, Tyusha, Matusya, Tusya, Musya. That is, theoretically, a matryoshka could also be called a motka (or muska). It sounds, of course, strange, although what is worse, for example, “marfushka”? Also a good and common name is Martha. Or Agafya, by the way, the popular painting on porcelain is called “agashka”. Although we agree that the name “matryoshka” is very successful, the doll has really become “noble”. Matryoshka immediately gained unprecedented recognition as a symbol of Russian folk art. Nesting dolls began to spread rapidly throughout Russia, each province considered it its duty to “dress” a nesting doll in accordance with local traditions.

Sometimes not only the outfit of the matryoshka changed, but also its shape – the doll became either spherical or oblong. The question of where to buy a matryoshka no longer arose – where folk craft was developed, there were always nesting dolls.

Now it is hard to imagine that two centuries ago there was no such toy in our country. The peak of popularity of nesting dolls came in the early 60s of the twentieth century, when foreigners began to come to the Soviet Union to participate in festivals and study. All of them tried to buy Russian nesting dolls as a memory of Russia.

Why nesting dolls, and not, say, scarves or boxes?

Most likely, the reason for the popularity of the souvenir matryoshka was that it was the personification of Russia itself with its broad soul, colorful outfits and large families. Matryoshka symbolizes the continuation of life. A woman gives birth to a daughter, who in turn will give the world another life, and so on. Matryoshka is a symbol of fertility, wealth, motherhood. That is why she enjoys such popular love.

There is a belief that if you put a note with a desire inside a nesting doll, then it will certainly come true, moreover, the more labor is invested in the nesting doll, i.e. the more places in it and the better the painting of the nesting dolls, the faster the desire will come true. those. the more internal figures, one smaller than the other, the more you can put notes with desires there and wait for them to come true. This is a kind of game, and the matryoshka here acts as a very charming, sweet, domestic symbol, a real work of art.

Today you can buy souvenir nesting dolls of the most unusual kind – the heroes of Russian fairy tales and even politicians. Of course, such nesting dolls are made mainly for foreigners, but what is paradoxical is that foreigners most often buy traditional Russian nesting dolls, and not pretentious remakes.