How did the Russian matryoshka conquer the planet? 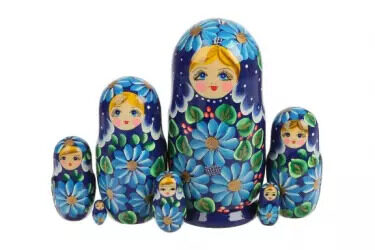 Go to any souvenir shop in Russia. What products are the most memorable, the brightest? Which ones are in wide and unflagging demand among foreigners? That’s right, motherfuckers.

The manufacture of wooden toys that can be invested one in another, Russian craftsmen mastered a very long time ago. First of all, it was Easter eggs and apples. Such toys were developed with the advent of the lathe. History knows that Peter I himself liked to work on such a machine, but there is no evidence that he made such crafts.

It is believed that the first Russian nesting doll was “born” in 1890 in the workshop of the Abramtsevo estate. The owner of the estate was Savva Mamontov, a famous industrialist and philanthropist. They say that a wooden toy came to the workshop from Japan – a figurine of a bald old man, the sage Fukuruma. This doll consisted of seven figures folded into each other. Sergey Malyutin, an artist from the Mamontov workshop, became interested in this craft and decided to create something similar, only with a Russian flavor. Malyutin made a sketch, the wooden form was made by craftsman Vasily Zvezdochkin.

Malyutin painted the dolls in a style that he himself came up with. The first nesting baby dolls set contained eight dolls and depicted a mother and seven daughters. This toy has survived to this day and is in the Sergiev Posad Museum of Toys. There are also other versions of nesting dolls: the Old Man, Getman, “The Tale of the Turnip.”

Why is the toy called a matryoshka? The name Matryona was very popular in Russia. It was usually associated with the image of a mother of many children, who had a portly figure, far from the standard 90-60-90. Over time, this name became a household name and was used to refer to brightly painted wooden dolls. The first doll of Sergey Malyutin became the embodiment of the most ancient symbol of Russian culture.

At first, nesting dolls were made in a Moscow workshop, and after its closure, the training and demonstration workshops of Sergiev Posad became the center of production.