Young lady with a surprise 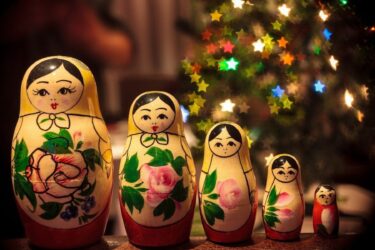 Matryoshka is called “a gift with a Russian soul,” but the appearance of one of the main symbols of Russia has remained a mystery for the second century. Interesting facts about the matryoshka were collected by Natalya Letnikova.

1. The prototype of the matryoshka was a wooden detachable doll of the Japanese deity Fukuruma. The souvenir ended up in the family of the patron Mamontov from the island of Honshu. In Japan itself, authorship is attributed to an unknown missionary monk … from Russia.


2. The first sketch of a chubby peasant woman was drawn in the 19th century by one of the founders of the “Russian style” – Sergei Malyutin. Vasily Zvezdochkin, a toy maker from Sergiev Posad, carved it out of wood. They called the new product by the name of Matryona, popular at that time.


3. There are secrets in creating nesting dolls. For strength, the tree must lie outdoors for two years. The entire path from the bar to the finished figurine takes 15 steps. The smallest figure is grinded first.


4. Matryoshka is a gold medalist. At the International Exhibition of Handicrafts in Paris in 1900, she took the first prize, traveled all over the exhibition Europe – from Berlin to London. Today, the unique exhibition “Difficult Toy” can be seen at the All-Russian Museum of Decorative, Applied and Folk Art.


5. The popularity of the nesting dolls inspired the work of Western masters. In 1890, the Russian consul reported from Germany to St. Petersburg that they began to forge a Russian souvenir in Nuremberg, but the production did not go, as well as in France.


6. The first nesting doll with a “recognizable face” is not at all an invention of the 1890s, as is commonly believed. Back in 1912, by the centenary of the Battle of Borodino, matryoshka dolls “Kutuzov” and “Napoleon” with headquarters were made. And for the anniversary of Gogol, whole series were produced: the characters of “The Inspector General” and “Taras Bulba”.


7. The largest nesting doll is located at the “crossroads of worlds” – in the Chinese city of Manchuria. The thirty-meter sculpture is installed at the intersection of the borders of Russia and Mongolia. The symbol of friendship is decorated with images of three girls: Chinese, Mongolian and Russian.


8. The most numerous family of nesting dolls was made in the Nizhny Novgorod city of Semenov. There are 72 figures in one meter long wooden matron. And one of the largest museums in Europe – the Russian Ethnographic Museum – conducts master classes on painting figurines.


9. A matryoshka the size of a poppy seed can be seen in the Tomsk Museum of Slavic Mythology. You will have to look at the mammoth bone figurine under a microscope. Modern Lefty Anatoly Konenko not only made a figurine a little over a millimeter in size, but also painted it according to all artistic canons.


10. There are six matryoshka museums in Russia at once: in Nizhny Novgorod, Kalyazin, Nolinsk, Voznesensky, Sergiev Posad and in Moscow. The Metropolitan Museum is located in the historical mansion of Leontievsky Lane, where the first Russian nesting doll was born.