WHICH MATRYOSHKA ARE PARTICULARLY POPULAR WITH COLLECTORS? 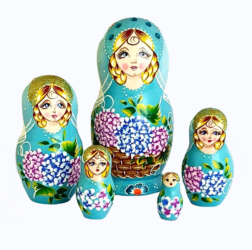 Every other matryoshka doll of today may fail to interest the collectors. Buyers and collectors are ready to pay handsomely if something unique and interesting catches their attention. Several factors influence the value of these exquisite nesting dolls-

The formula is very simple-the older the doll, the costlier it is. The dolls that are 100 years old or more are likely to fetch better money than those made in recent years. The art market highly values antique things and handsomely rewards such items.

Handcrafted dolls are costlier than dolls prepared in factories with the help of machines. The experienced and highly skilled woodcarvers and painters provide intricate detailing and smooth finishing, which the machines fail to do. The artists and master woodworkers spend a lot of time and effort giving these dolls intricate designs and glossy finishing. Thus, their labor is duly awarded by the buyers.

The number of pieces in a matryoshka doll set will determine the doll’s price. A doll with 10 pieces will cost more than a doll with 5 pieces. The more the pieces in a doll set, the more effort and skill the painter and carver put into the design and intricately painted these doll pieces. And hence, these dolls are costlier than the others.

HOW AND FROM WHAT IS A COLLECTIBLE NESTING DOLL MADE?

Making a Russian nesting doll is a complex task that requires fine carving, intricate chiseling, detailed painting, and glossy finishing. It takes a good amount of effort and skills to make one matryoshka doll. The following steps are followed to make these Russian nesting dolls –

➤ The first step involves the selection of the wood. Mostly linden, birch, and aspen wood are used to make these dolls. The trees are felled around Spring and then stored without the bark for two years for drying. The master woodworker decides when the wood is ready to be worked on.

➤Using a rotation machine, the carver turns the wood on its axis. Using hand tools, he minutely chisels it into standard cylindrical shapes. The smallest piece is turned first, and then accordingly, the other pieces are meticulously culled out. All the pieces are turned out using hand tools so that these pieces smoothly fit inside each other.

▶Once the carving is finished, the sketch master sketches these culled-out figures. Before beginning with sketching, the figures are coated with glue primer to provide a smooth surface. Then these sketches are minutely painted by expert painters. Some painters begin by painting the face, while others start by detailing the costume and attire of the drawn figure.

▶ After the paint dries up, the dolls are given a varnish coating to give them a glossy finish and increase their durability. Then these finished dolls are inspected for any defects and then accordingly categorised. Finally, these dolls are sent to toy stores.

Matryoshka dolls and Russia share a deep bond that began in the 1890s, with the Mamontov couples taking charge. The doll depicting an old bald monk, popularly called Fukuruma, was taken to the toy workshop called ‘Children’s Education’ for observation. The nested figurines of the old monk immediately caught the interest of master Vasily Zvezdochkin. He carved a similar design on the wood. One of his colleagues named, Sergey Malyutin, painted and decorated the design. Initially, figurines of children emerged over these dolls.

The Russian traditional matriarchal lifestyle and folktales started appearing on these dolls. The Russian nomenclature of Matryona soon found symbolic and scintillating prominence in these nesting dolls. The name Matryoshka became a symbol of Russian tradition and culture. These dolls usually had a Russian peasant girl figure in the traditional sarafan holding a rooster painted on the outermost piece. And subsequently, the other five pieces had the figure of peasant girls in the traditional Russian attire holding flowers, sickle, wheat straw, and bread loaf. The second last piece had the image of a boy imprinted on it. The last piece had the figure of a baby in swaddling clothes. Thus, the artists represented the cycle of human life and its continuity through these dolls.

Though the ‘Children’s Education workshop closed down in the wake of the 20th Century, many other workshops and toy-making units continued to produce such rare matryoshkas. Sergiev Posad emerged as one of the leading Russian nesting doll production centres. Completely handcrafted with extreme detailing and depth, these dolls were priced very high by the masters. But, this only added to the popularity and craze of these dolls. These dolls were in huge demand locally, but the reputed boutiques and toy shops in Italy and Germany also gave huge advance orders to these workshops and production units.