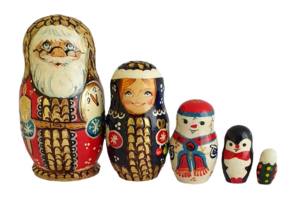 Russian Matryoshka: Story of its Origin

The story of matryoshka started at the end of the 19th Century most probably around 1898 and 1900. A famous turner named VasilyPetrovichZvezdochkin used to work as a manufacturer of toys made from wood. Once an artist with the name Sergei Malyutin asked him to make an unusual cut in which he told him to insert the wood containing the exact cuts. The main condition was that every cut should be a different style and size. After creating the first Matryoshka containing 8 wooden dolls, several other styles of Matryoshka were made. In the pre 20th Century, Matryoshka was made using 24 wooden dolls.  Nikita Bulychev, a famous turner also successfully managed to create dolls consisting of 48 young girls in wood.

The Russian Matryoshka presented to the world

After a few years of the booming of Russian Matryoshka in Russia, it was then displayed to the world in an exhibition organized in Paris. The majority of the foreigners attending the exhibition loved to play with it. After the exhibition, a buzz got created around the globe, and heavy demand for orders from different places started coming to Russian crafters. The production of Russian Matryoshka blew up at an immense rate and on a large scale in SergievPosad.

Fascinating facts of the invention of Matryoshka

Russian Matryoshkas come in multiple types based on the number of dolls blended in the final product. Even the style of the painting is distinct for each Matryoshka. Usually, the dolls consist of 3, 8, and 12 elements. However, some craft artists can even design and craft mother dolls having 21, 24, 30, and 42 elements. The main doll in the Russian Matryoshka portrays the image of the Russian ladies of that time period, and the small girls’ dolls depict the Russian culture with traditional dresses, carves on the head, and having stuff like jars, baskets of berries, or milk in their hands. Over the years, Matryoshka got portrayed as characters from the famous fairy tales, stories, and fables written by famous authors or poets.

Altering the shape and style of the Russian Matryoshka

The shape of the Russian Matryoshka dolls was modified and given the shape of the cone. But this new alteration was not much happily accepted by the Russians, and that’s why this evolution plan was eventually dropped.

Stuff used to craft Russian Matryoshka is a deciduous tree because these can be easily modified. For coloring; gouache, ink, and aniline dyes are commonly used. Lastly, for adding a protective layer, they use wood wax or clear varnish based on oil.