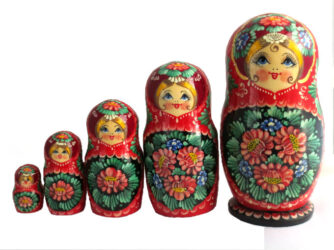 The Russian nested dolls called Matryoshka have become an undisputed symbol of Russian art, culture and tradition. These dolls are proudly kept as a decorative art form on fireplaces and bookshelves in thousands of Russian houses. Not only in Russia, but these dolls are also in huge demand worldwide. Tourists, particularly from Europe and America, consider it a must to buy these dolls when visiting Russia. Equally is the craze of collecting it as an item of the rare art form.

History of the Russian Dolls

Over the last 100 years, matryoshka dolls have become strongly associated with Russia. Though these dolls have come to prominence only after being introduced as Russian traditional art, varying versions of their antiquities exist.

Many people believe that the concept of these dolls is not a modern discovery. Almost thousands of years ago, the Chinese had the expertise of making nested wooden boxes for storage and decorative purposes. The big box, when opened, had an identical wooden box inside it, just a little smaller in size. Similarly, the second box, when opened, had a third identical box of a relatively smaller size. The pattern used to go on to eight boxes, one inside the other. Number eight was considered lucky by the Chinese people. Gradually, these nested boxes evolved into nested dolls with time.

Many others believe that the concept of nested dolls soon reached Japan, where the doll making skill was largely matured and refined. The Japanese imprinted their popular mythology of the Seven Lucky Gods on the wooden dolls. The image of the Japanese God of happiness and longevity, Fukurokuju, is beautifully drawn on the outermost piece of the doll. And similarly, the other six gods, according to their importance, are painted in the succeeding pieces in decreasing order so that they can easily fit in the outermost piece. The dolls were brightly painted and had great detailing and finishing. And it is widely believed that it was one such doll that caught the attention of Elizaveta Mamontova, the wife of the famous Russian entrepreneur and industrialist Savva Mamontov. She took the doll to Russia as her husband was a great patron of art and firmly believed in the revival of Russian traditional art.

Also, another popular version is that the first nested dolls in Japan had the image of a bald monk named Fukuruma in a meditative posture. The other smaller pieces portrayed the childhood and adulthood of the monk with lively colours and beautiful hair. Many historians say that this doll caught the attention of Elizaveta Mamontova.

The general view concludes that these modern Russian nesting dolls are modelled on the Japanese dolls portraying the Seven Lucky Dolls. But several renowned historians, after going through several memoirs, argue that the inspiration behind such dolls came from Russia itself. Not through a doll but through the detachable Easter eggs which Russians popularly created.

These dolls became an overnight sensation after Elizaveta Mamontova won a bronze medal by showcasing them at the World Exhibition in Paris in 1900. And since then, there has been no looking back for these dolls.

The art of making matryoshka dolls has been unique and finely perfected with time. Beginning with the traditional eight pieces that symbolise good luck in the Chinese and Japanese mythologies and folktales, it is widely believed that the number of pieces has risen to a whopping 1800. The abovementioned claim, though, appears dubious in the first place itself.

Around 50-70 matryoshka dolls were handcrafted in the 1960s at the Semyonov factory according to the local traditions of the province. These exquisite traditional Russian art form pieces were brightly painted and intricately finished and sold in toy stores across Russia. Handcrafting of such dolls requires special skills in woodturning, carving and painting.

The largest doll now is believed to have been made by the Chinese for an exhibition. The doll is approximately 1 metre in size and has about 72 pieces that beautifully fit inside one another.

The renowned Russian Left-Hander Museum in St. Petersburg now houses the world’s smallest matryoshka doll. The doll has been intricately carved on the tip of the human hair and even painted. This doll is a masterpiece by the well-renowned artist Vladimir Aniskin from the Novosibirsk province.

How are Russian Matryoshka Dolls Made?

All the pieces of a matryoshka doll must be made with one piece of wood because the wood’s expansion-contraction features and moisture retention capacity are unique. Thus, making pieces out of different wood will not smoothly and properly fit into each other. Following steps are followed while making these exquisite dolls –

The selection of the proper wood having the required quality is important to make these dolls. Naturally, limewood and linden are best suited to make such dolls and other wooden toys. But other wood types such as alder, aspen, balsa or birch can also be used to make these exquisite dolls. The trees are marked to be cut at the beginning of spring. Around the start of April, these trees are felled after due inspection of the quality by an experienced woodworker. Then, these logs are properly stored to allow air circulation between them for drying. The drying period extends from a year to two. The woodworker decides whether the wood is ready to be made into dolls or not.

The next step is woodturning and cutting the wood. The log is fixed to a rotating axis, and handheld tools are used to shape the piece of wood by cutting and chiselling out the log. These pieces of logs are given a cylindrical shape, and the top and bottom are shaped separately. Usually, the smallest piece is culled out first, and then the rest follows according to increasing order.

After the paint dries up, a lacquer coating or varnish is applied to protect the colour from smudging. It also protects the wood and increases its durability. Applying lacquer or varnish also provides a glossy finish to these dolls that enhance the brightness and tone of the colour by manifold.

Once the coated varnish or lacquer dries up, the quality of the dolls is checked using a machine. The defective pieces are sorted out, and the rest are packed and sent to various toy shops to be sold.

The matryoshka dolls have evolved. These dolls have conceptual similarities with the nested boxes used for storage by the Chinese. Then these dolls were refined by the Japanese, who drew their mythological characters on them. The theme of these dolls was further improved and refined by the Russians, who primarily drew and painted female figurines. These dolls derived their present names of Matryoshka, meaning mother, and babushkas, meaning old lady or grandmother.

As of today, these dolls are themed from mother to animals, flowers, historical events or famous political and sports personalities. Many artists and companies that make these dolls also offer the option of customisation. One can even get pictures of one’s family painted over these unique dolls.

The images and the size and shape of these dolls have also undergone several changes and evolution. The woodworkers can now finally chisel out a specific wood shape that is more refined and smooth. Both the parts of the dolls are symmetrically culled out to fit into each other easily. Unlike the traditional nesting dolls with a maximum of 5-8 pieces of dolls, these dolls have even reached a record 72 pieces.