How Did The Russian Matryoshka Series Conquered The Planet?

When talking about traditional Russian crafts and their treasures, it is impossible not to refer to Russian Matryoshka. Nesting dolls are the most popular and generally famous of every single Russian souvenir. Matryoshka, Russian word, is used for describing these wooden dolls. However, they are additionally called Matroska, Matryoshka, Matriochka, babushka, or stacking dolls. This nesting doll, which contains at least six other dolls, has a fairly decent history. What is it? What are the sources of inspiration? What is its symbolism, and what are the new models? To find out answers to all these questions, please be with us till last. 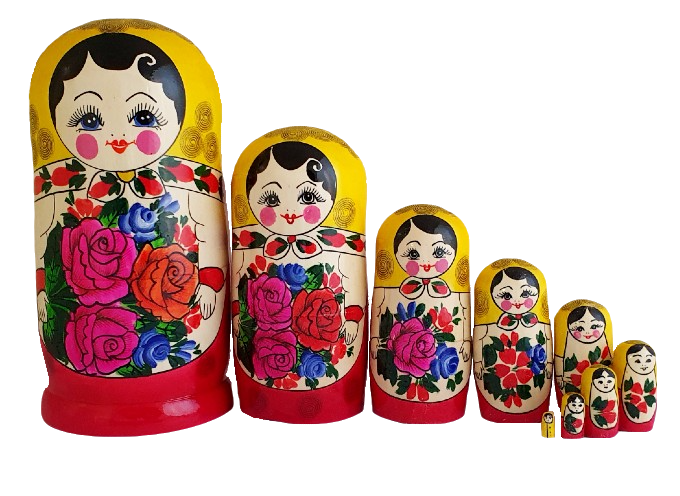 A Japanese inspiration for a doll with Slavic accents

The prototype Russian souvenir, Matryoshka dolls, are so characteristically connected to Russia that their genuine origin has been neglected. The dolls, truth be told, are Japanese and named kokeshi. An eminent Russian industrialist named Savva Mamontov went on his travels to Japan and, in the last part of the 1890s, brought back one of the seven gods of bliss. As per Japanese custom, the seven gods show up in the city for the new year and distribute gifts to those meriting them. Motivated by the puppet, painter Serguei Malioutine got his brushes and made a Russian form, portraying not a divinity but rather the consoling essence of a worker lady containing her posterity, right down to an infant. Nicknamed Matryoshka, got from the Russian female first name Matriona and summoning a picture of a rural, strong nation occupant, the doll immediately won the hearts of Russians, particularly children. A bronze medal is awarded to this model, who will immediately be emulated. Several regions such as Semionova, Polkholvsky Maidan, Kirov, or even Serguei Possad specialize in the production of these nesting dolls.

The journey of the Matryoshka

Consequently, a very important export of these dolls begins with their annual fairs in Leipzig. These are regular meetings to which our nesting doll joins from the Berlin exhibition to the annual craft bazaar in London. Travelling exhibitions organized by the Russian Society of Shipping and Trade allow it to be hosted in the coastal cities of Turkey, Greece, and the Middle East. If the building of the Soviet empire somewhat slowed down the travels of this travelling doll by relegating artisanal activities to state factories, she continued on her way by adopting models more in conformity with the party. So this doll has put on a more classic costume. Less originality but still as successful. The one from the beginning of the 20th century, representing a peasant holding a rooster, is still preserved. Matriona, the largest doll, plays the role of the mother, and it is her daughters who were nicknamed Matryoshka. It should be remembered that the rooster was once a symbol of fertility and that having one of these series assured a household a large number of children. This is also one of the reasons why this mother managed to break into homes for the long term.

Today matryoshka or nesting dolls are famous everywhere in the world. Beyond the customary theme dolls, nesting dolls currently come in sets of political pioneers, pop symbols, creatures, and fantasies, actually nearly anything you imagine. They’ve risen above their customary frame and have become an extremely mainstream symbol, particularly in the crafting community.

With the fall of the wall, the doll series was able to acquire new pageantry. It was used to compose satirical dolls in the image of certain politicians. It is also available for events such as Christmas or with figured animals. The imagination of series creators is again unrestrained, and they can design more series in tune with current trends. If she still fascinates, the Russian doll decoration has made changes to her original costume. Cheap Matryoshka has also appeared. They are without comparison with the neat and aesthetic models that we put at your disposal. We are proud of this matryoshka heritage. They represent a whole section of our identity and help strengthen our country’s image of creativity and fertility. This is why we are particularly demanding in the selection of our series. They are still very authentic in terms of design and their paint finishes.

It’s a remarkable story if you consider how hard it is for a toy to remain famous for even a decade. The nesting doll’s enduring achievement took, it appears, even its most punctual designers by surprise. The doll’s origins – the year they previously showed up, who painted them, and whether a Japanese plan inspired the dolls. Over a century later, on account of some new takes on the norm, the doll’s story is as yet being freshened once again.