How did the Russian matryoshka series conquered the planet? 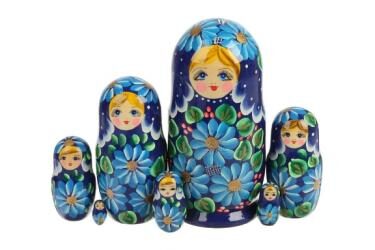 When talking about traditional Russian crafts and its treasures, it is impossible not to refer to Russian matryoshka. This nesting doll, which contains at least six other dolls, has a fairly recent history. What is it ? What are the sources of inspiration? What is its symbolism and what are the new models?

A Japanese inspiration for a doll with Slavic accents

It was by adopting the principle of Japanese wooden dolls representing the Shichi-fuku-jin, namely the seven gods of happiness that Sergei Malioutin, a craftsman working in Abramtsevo, gave birth to these famous dolls. Originally, the largest of the dolls was in the image of a bald god and had a very high forehead. His brilliant idea was to have Vasily Zvezdochkin sculpt the first Russian matryoshka series. She then had eight dolls. The first featured a girl with an apron. Then came out other figurines including a boy and a girl in order to extend the descendants to finish with a baby. This miniature dollhouse met with great success in Paris during the Universal Exhibition in Paris in 1900. The ingenuity of the embedding process, the delicacy of the wooden sculpture, the delicacy of the painted patterns and finally the symbolism of this matryoshka immediately seduced the jury. A bronze medal is awarded to this model who will immediately be emulated. Several regions such as Semionovo, Polkholvsky Maidan, Kirov or even Serguiev Possad specialize in the production of these nesting dolls.

The journey of the matriushka

Consequently, a very important export of these dolls begins with their participation in annual fairs like in Leipzig.
These are regular meetings to which our nesting doll joins from the Berlin exhibition to the annual craft bazaar in London. Traveling exhibitions organized by the Russian Society of Shipping and Trade allow it to be hosted in the coastal cities of Turkey, Greece, and the Middle East. If the building of the Soviet empire somewhat slowed down the travels of this traveling doll by relegating artisanal activities to state factories, she continued on her way by adopting models more in conformity with the party. So this doll has put on a more classic costume. Less originality but still as successful. The one from the beginning of the 20th century, representing a peasant holding a rooster, is still preserved. The matriona, the largest doll, plays the role of the mother and it is her daughters who are nicknamed matryoshka. It should be remembered that the rooster was once a symbol of fertility and that having one of these series assured a household a large number of children. This is also one of the reasons why this mother managed to break into homes for the long term.

With the fall of the wall, the doll series was able to acquire new pageantry. It was used to compose satirical dolls in the image of certain politicians. It is also available for events such as Christmas or with figured animals. The imagination of series creators is again unrestrained and they can design more series

in tune with current trends. If she still fascinates, the Russian doll decoration has made changes to her original costume. Cheap matryoshka have also appeared. They are without comparison with the neat and aesthetic models that we put at your disposal. We are proud of this matryoshka heritage. They represent a whole section of our identity and help strengthen the image of creativity and fertility in our country. This is why we are particularly demanding in the selection of our series. They are still very authentic in terms of design and their paint finishes.